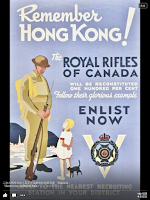 Battle of Hong Kong has its place in Canadian history. My children learned about it in their high school education. Former PM Stephen Harper on November 11, 2012 visited a war cemetery in Hong Kong paying tribute to Canadian troops who lost their lives during World War II.

Being a former St John Ambulance member in Hong Kong, I attended annual memorial service of those died in the war of Hong Kong before migrated to Canada. And my fellow members still doing it in Remembrance Day in Hong Kong. At least, they did that in November 11, 2015.

The message do pass from generation to generation. Not because we want to glory heroic acts or plant the seed of hate to our children. But to remember the dead and the past. Lest we forget.